A train named Skyfall made a maiden voyage to Edinburgh on 16th Feb 2013 afternoon in a lavish celebration of Britain’s highest-grossing film to date. The service, operated by East Coast, was the first in a series of journeys as the specially-branded train entered active service on the traditional Flying Scotsman route between Waverley and London’s King’s Cross station. 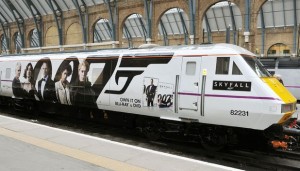 The Skyfall train prepares to leave for Edinburgh

All 11 coaches had been wrapped in decorative artwork provided directly from Skyfall to celebrate the release of the 50th-anniversary movie on Blu-ray/DVD, which has also earned a staggering £708 million worldwide so far.

Passengers made the free journey on board the train on Saturday, mirroring Bond and Ms voyage to the north for the movie’s final act.

However, it is unlikely to be as glitzy as yesterday’s maiden voyage as Bond girl Bice Marlohe and Naomie Harris, who plays Eve Moneypenny in Skyfall, will both be on board.

Skyfall Martini cocktails were served by Erik Lorincz, who designed the cocktail for the film, while one carriage was given over to a dedicated Blu-ray screening lounge to watch the box-office mega-hit from the movie franchise.

Film critic Jon Melville predicted fans would leap at the chance to get a ticket on board the Skyfall train, with the move representing another potential tourism boon for the city of London.

He said: Skyfall, of course, has such a great Scottish connection with the filming that took place in the Highlands, so anything that we can do to get people travelling to Scotland is a great thing. If we’re talking Scotland, we have such a strong connection to Bond because of Sean Connery and because Bond is half-Scottish. People will be able to soak up the atmosphere of Sean Connery’s city and then maybe head further north and see where they filmed Skyfall. (Scotsman.com)

Visit Scotland’s regional director Manuela Calchini said Scotland features heavily in the thrilling climax of the movie Skyfall, surely one of the greatest ever Bond films, and we support any tourism initiative that takes advantage of its outstanding success.

In future, the train will serve permanently all east coast customers. The train will also become an add-on to cities’ tourist spots.